The biggest jackpot at LuckyAce Casino can be found by playing Millionaire Genie. This popular progressive slot can grant your lifetime wish of riches. The Blue Smiling Genie is the guy you'll want to get to know when at this progressive slot.
Play Now at luckyacecasino.com!

The tale of a magic lamp that when rubbed reveals a magic genie who grants three wishes comes down to us from a medieval epic called One Thousand and One Nights. Told by Queen Scheherazade to her malevolent 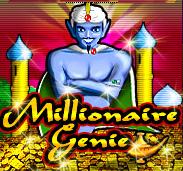 husband, King Shahryar, to delay her execution, the stories are recounted over a period of one thousand and one nights, and every night ends with a suspenseful situation, forcing the King to keep her alive for another day.

There's no danger but a lot of excitement in playing Millionaire Genie, a slot based on the theme of the story. The Blue Smiling Genie is the guy you'll want to get to know when at this progressive slot. Other rewarding symbols that evoke tales from the Arabian Nights are the Magic Lamp, the Red Diamond, and Bags of Cash. You'll also get paid if three blanks come up. This slot isn't complicated, but then again complicated wishes always get you in trouble.

Millionaire Genie is a single line, three-coin, three-reel spinner from Random Logic that features one of the web's largest progressive online jackpots. You can play Millionaire Genie at LuckyAceCasino.com