LAUGHLIN, Nevada-- A retired Wisconsin woman vacationing in Laughlin, Nev., will take home quite an impressive souvenir from her trip – a check for $1,115,540.81! The woman became a millionaire 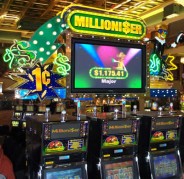 playing Aristocrat Technologies' Millioni$er™ multi-site progressive penny slot at Don Laughlin's Riverside Resort Hotel and Casino. The lucky winner had invested only about $100 before she won the vacation memory of a lifetime.

The Millioni$er jackpot resets to $1 million and is ready for the next lucky winner. Just last month, a player in Northern Nevada won more than $1 million playing Millioni$er at a local casino.

Since Millioni$er became a state-wide multi-site progressive in Nevada, the progressive jackpot has been won several times, making millionaires of players across the state. Currently there are nearly 287 Millioni$er machines available at 47 casino properties throughout Nevada.

Millioni$er is a Hyperlink® progressive and sports a patented second-screen feature with four different jackpot levels that can be triggered randomly during game play. The four tiered progressives give Millioni$er a higher hit frequency so players win jackpots more often. Millioni$er jackpots are paid out as an annuity over a 20-year basis.

Don Laughlin's Riverside Resort Hotel and Casino was founded and established in 1966 as Laughlin's first hotel and casino and is located on the banks of the beautiful Colorado River. Owned and operated by Don Laughlin and his family, guests will find a number of fun activities while staying at Laughlin's family-friendly resort. Guests enjoy Nevada-style gaming action and entertainment 24 hours a day in a relaxed small-town atmosphere