Zorro Slot Leaves its Mark Across the Country

LAS VEGAS, Nevada -- Zorro has left his mark on casinos across the United States, and players have been cashing in on the fun! In 2007, players won more than $2.4 million playing Aristocrat's Zorro 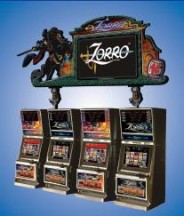 Zorro is a popular penny slot machine.  penny slot. The most recent win was at Arizona Charlie's Decatur in Las Vegas, where the progressive penny slot jackpot hit for an incredible FIFTH time in this location in less than a year.

"Players are winning with Zorro all over the U.S. -- California to Connecticut, Nevada to Wisconsin and everywhere in between, our Zorro penny slot is the game players love to play," said Aristocrat President Tim Parrott.

Most recently in Las Vegas, a lucky local won $50,000.00 playing Aristocrat's Zorro penny slot, becoming the FIFTH player in a year's time to hit the jackpot at Arizona Charlie's Decatur location. No other casino in Las Vegas or in all of Nevada can boast such a high hit frequency for the Zorro game.

Arizona Charlie's Decatur is one of the top local casinos in Las Vegas. Featuring more than 1,400 ticket-in/ticket-out slots, video poker and Keno machines and a wide variety of table games, Arizona Charlie's Decatur offers some of the best gaming choices in town. They also have an exciting, full-service Race & Sports book and is the only casino in Las Vegas to host a 24-hour bingo parlor.