In addition to a wide selection of slots games, Club USA Casino features poker, blackjack, baccarat, keno, craps, roulette and progressives jackpots.  Newly released slots include Coyote Cash, Funky Monkey, Enchanted Garden, Jackpot Cleopatra's Gold, Monster Mayhem, Realm of Riches, and Ronin  Play any of the Video Slots plus Keno and Scratch Cards and receive a 100% bonus up to $777, using coupon code: BIGSLOT. And the best news is the casino accepts US players and the deposits are easy to make.
Play Now at Club USA Casino!

FLORENCE, OR -- An Oregon casino said a woman won a record-setting $5 million from a $4 bet on a slot machine after less than an hour at the casino.
A spokesman for the Three Rivers Casino and 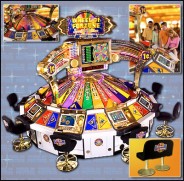 Wheel of Fortune slot machine  Hotel in Florence said the Hillsboro, Ore., woman had been playing the Penny Wheel of Fortune machine, which is networked to a number of machines throughout the West Coast and allows for large payoffs by a building a percentage from all play on the machines, KPTV, Portland, Ore., reported Tuesday.

The woman said the Wheel of Fortune symbols lined up and the machine instructed her to call for an attendant after she had been in the casino for less than one hour.