Poker Stars has reopened for most of the world, but not yet in the United States. It is endorsed by professionals like Daniel Negreanu and Chris Moneymaker. The site offers Texas Hold'em, Omaha, Omaha 8/b, 7 Card Stud, 7 Card Stud 8/b, Crazy Pineapple, Crazy Pineapple 8/b, Triple Draw, Royal Hold'em. Table limits range from penny games up to $300-600. The competition leans to the more challenging end of the spectrum.
Play Now at PokerStars!
Free Slot Tournaments Going on Now at Roxy Palace!

Your chance to take down World Series of Poker world champions

Tuesday, August 11, 2009
LONDON, England -- Could you beat a world champion poker player? How about beating two? Jamie Gold and Peter Eastgate are hosting a charity poker tournament at The Casino at The Empire, Leicester 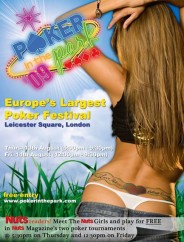 Do you think your poker game is up to scratch? If you do, and you fancy pitting your skills against WSOP world champions Jamie Gold (2006 World Champion) and Peter Eastgate (2008 World Champion), register your interest at www.pokerinthepark.com/jamie-gold-charity-tournament.html and put your money where your mouth is. The tournament is being held at the Casino at the Empire on Thursday 13th of August at 7:30, alongside Europe's biggest poker festival, Poker in the Park.

This unique opportunity to play against two world champion poker players is being held to benefit the Jamie Gold Foundation, a charity set up by Gold following his record-breaking $12,000,000 World Series of Poker victory. The tournament buy-in is a £500 charitable donation to the Jamie Gold Foundation, and gets you into the fray with not just Gold and Eastgate, but with football legend Teddy Sherringham, TV actor Michael Greco, musician Mark Chadwick of the Levellers and poker pro JJ Hazan. (Players may also play for their seat at £50 sit'n go satellite tournament held all Thursday at the Casino at the Empire).

£20,000 of prizes for winners have been generously donated and include a seat to the London EPT donated by Poker Stars, a package to the Unibet Open, a tailor-made Gresham Blake Suit, a week's poker training in Las Vegas, a pop star experience, a safari park expedition, a custom poker table, a custom chip set and several items of jewellery.

The Jamie Gold Foundation Charity Tournament is held alongside Poker in the Park, Europe's largest Poker Festival. Poker in the Park takes place in Leicester Square, London on Thursday the 13th of August (5pm - 9:30pm) and Friday, August 14th (12:00 pm - 9:30pm). It is free to enter and has everything for the poker enthusiast, including free live poker tournaments every hour, free lectures from the biggest names in poker, free personal poker tuition, heads up play, poker books and gear and much, much more. See www.pokerinthepark.com for details.
[ more gambling news or poker news ]
© 2006-2016 ReadyBetGo!