Club USA Casino has good craps action at their site. They offer private, public and reserved tables. The minimum bet is $1 and the max is $500. The casino offers behind the line odds. Nice graphics and sound add up to a satisfying craps experience. Good shooting.
Play Now at Club USA Casino!
Free Slot Tournaments Going on Now at Roxy Palace!

Flight of the Conchords Make Las Vegas Stop this Saturday 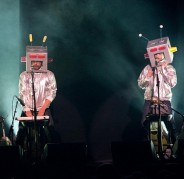 The tour coincides with the conclusion of the second season of HBO’s hit show “Flight of the Conchords” and the release of the duo’s as-yet-untitled second full-length album for Sub Pop. Flight of the Conchords' self-titled 2008 full-length is nominated for a Grammy for best comedy album. This follows their 2007 Grammy win for the EP The Distant Future in the same category.

Flight of the Conchords is composed of Bret McKenzie and Jemaine Clement. Billing themselves as "Formerly New Zealand's fourth most popular guitar-based digi-bongo accapella-rap-funk-comedy folk duo", the group uses a combination of witty observation, characterisation and acoustic folk guitars. The duo's comedy and music became the basis of a BBC radio series and then an American television series, which premiered in 2007, also called Flight of the Conchords.