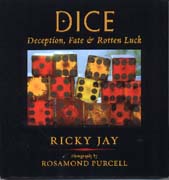 Jay rolls the history of dice in this entertaining and informative volume that takes readers from the earliest forms made from animal hooves, to those made from ivory, celluloid, and plastic. He also charts the infamous players of history, accompanied by Purcell's seductive photos. 13 photos.
Get it at Amazon!
Read a review of Dice: Deception, Fate & Rotton Luck

For anyone who plays, supervises or plans to research the game. Includes history of dice and craps; the mathematics of the game; the 'extra-sensory perception' theories; private games and Right bettors (and why they die broke); Bank Craps; the private or military version of the game; illegal craps; hustlers and cheats; inside and outside work and crooked dice terms.
Get it at Amazon!

The History of Dice

The history of dice is nearly as old as human culture itself. Dice were part of the overall collection of divination tools used by fortune tellers, healers, witch doctors and soothsayers in ancient tribes all over the world. The job of the witch doctor or soothsayer was to determine if the person, village or tribe would encounter good or bad luck in the future. Dice were used as magical implements to help make these predictions.
The six-sided dice of today evolved from the ankle bones, often called knucklebones, of hoofed animals. Even now, dice are sometimes colloquially referred to as "bones", as in "roll them bones". Specimens have been found in American prehistoric Indian mounds, including the fossilized knucklebone of a llama. There is also a strong linguistic correlation between the Arabic word for knucklebones and the word for dice.
The Greeks used Astragali, the anklebones of sheep, to determine their fortunes and to play games. The Romans used bones for dice, but dice were also created and had cubical forms that featured dotted faces.  Etruscan dice found near Rome, and made about 900 B.C., are similar to the dice of today, with the opposite faces adding up to seven: 1:6, 2:5, 3:4.  Sir William Matthew Flinders Petrie found a very modern six-sided die in the Greek colony of Naucratis, Egypt dated to about 600 BC. Dice from this period have also been found in Britain in the prehistoric earthworks of Maiden Castle.
It wasn't long after dice became popular in games that we find the first instances of “loaded” or weighted dice. Archaeologists have found dice in Pompeii that are weighted with small bits of lead.
With the decline of Rome and the subsequent period of the Dark Ages, games using dice were not much in evidence. However, the Middle Ages saw a resurgence in dicing despite the condemnation of the church. The dice makers' guilds had strict laws forbidding the manufacture of loaded or fraudulent dice. This didn't stop sharpers and thieves from using them.
Over the years dice have been made with many different materials. Ivory and bone were especially popular with early dice makers. Dice have been made of animal horns, clay, animal teeth, seeds, and nut shells. Others were made of bronze, agate, onyx, jet, alabaster, marble, rock crystal, and amber. More expensive dice were made of precious stones, gold, silver, ivory, and even porcelain.
Modern casino dice are made of extruded cellulose acetate. They are transparent, have sharp, non-beveled edges and don't have indentations to represent numbers. They are also big. This is so the user and the casino can see that the dice aren't loaded or have distorted faces or edges. The plastic is the same density throughout and the user can quickly test that their shape is a true platonic solid. This assures both the player and casino that there is no cheating going on. When money is on the line everything has to be as close to random as allowable by Newton. Modern casino dice have been precision cut to 0.0001 inches for absolute accuracy.
You can often buy used craps table dice from the casinos. Casino dice only have a lifespan of eight hours on the craps tables; they are then retired and replaced with a new set.
For a glimpse of the variety of dice that have been made over the ages, you can visit the sites of collectors like Arjan Verweij, who has more than three thousand dice in his collection.
Notes about this article

The main source of most of the “history of dice” articles you read on the web is John Scarne's “Scarne on Dice” originally written in 1943, and reprinted in 1975.  While Mr. Scarne was not famous for being a historian, he was honest enough to cite his sources when he wrote his history of dice and craps. If you follow Scarne's trail back to his original source you will find Stewart Culin (1858-1929), curator of Ethnology at the Institute of Arts and Sciences of the Brooklyn Museum in New York City. Mr. Culin was one of the first ethnographers of games and spent considerable time and effort describing their origins by traveling the world over.