Poker's elder statesman teaches the novice what to expect in the world of online play including providingmore than two dozen poker strategies and identifying online 'tells.' In a dozen concise but well-illustrated chapters he discusses the impact of televised poker and how online poker now ushers in a new era. One chapter offers a list of places to play with information on where you may learn to play or discuss the game and the benefits of online learning. Brunson discusses how to download software, fund your account, and how to get a taste by playing small money before advancing to bigger.
Get it at Amazon!
Read a review of Online Poker

Carbon Poker Official SiteCheck out carbonpoker.com for the latest online poker slots, tournaments and events, including the Bad Beat Jackpot.

KAHNAWAKE MOWHAWK TERRITORY, CANADA - As reported by pokerlistings.com: "The Bad Beat Jackpot at Carbon Poker has hit a record high. According to the poker site it's now sitting at more than $770,000, 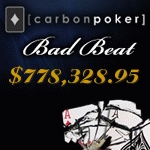 Carbon Poker Bad Beat Jackpot  which makes it the biggest online haul of its kind.

Carbon Poker predicts that the Bad Beat Jackpot will break the $800,000 mark by the end of the month if it isn't won anytime soon.

The jackpot was first introduced by Carbon Poker earlier this year. It has grown rapidly and fast become a popular option at the poker tables on the poker site.

"As the jackpot grows, so does the action at the tables," said Jay Manning, a Carbon Poker spokesperson..."

"Since its introduction earlier this year, the Bad Beat Jackpot has yet to pay out at Carbon Poker, even though it only takes a hand of quad sevens or better getting busted to win it..."

"If you'd like to take a shot at the Bad Beat Jackpots, head to Carbon Poker."