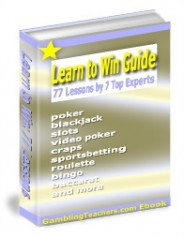 This slot captures the comedy of the legendary British comedy troop's film Monty Python and the Holy Grail. The are three bonus rounds including Film Clip triggered by 3 film clip symbols scattered

Gayle Mitchell is the most recognized female expert of casino gambling and has written extensively and presented seminars about casino gambling since 1996.  She is the author of the Casino Gambling Made Easier series of books, numerous E-Books, booklets and the Slots Trilogy.  She is also the editor of five online gaming newsletters including Casino Players Ezine.  Gayle's website is www.easycasinogambling.com  on the middle reels.  There are 38 such symbols contained in this game, choose your favorite, watch the action and collect a bonus reward.

Next up is GrabaGoblet in which the player attempts the best choice in a shell game scenario. The best and most profitable bonus event is triggered by 3 Holy Grail symbols followed by a rendition of the classic Camelot song and dance number from the film.

Make your 7 selections from the pair of dice in the top box moving around the game board while accumulating bonus credits and/or a corner spot. Three additional bonus games of Black Knight, Trojan Rabbit or French Cast await the player's selection.

After an always entertaining showing of that selection, additional bonus credits are added to what surely must be 'the comedy slot hit' of the season.