Online casino slots are loose. Why? Because with the lower overhead, no slot employees to pay, and lower taxes, they can afford to pay more back to their customers. Roxy Palace offers a huge range of casino slots for you to play for fun or for real money prizes. From easy to play 3-reel games and fruit slot machines, all the way through to popular video slots, progressives slots and brand new releases from Microgaming, every game provides a high level of quality.
Play Now at Roxy Palace!
Free Slot Tournaments Going on Now at Roxy Palace!

LONDON, England -- One lucky online slot machine player is glad she took her friend's advice and tried the free games at WinADay.com. She ended up winning a progressive jackpot of over $100K 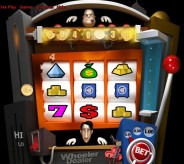 "My friend convinced me to try WinADay.com," said the 3D casino's latest jackpot winner. "I tried out all the games in Free Play and then, after I'd found my favourite games and learned how to play, I switched to real money."

A video preview of WinADay's progressive jackpot games can be viewed here: www.youtube.com/watch?v=FJZzawGO6kQ

The night of her big win, BONDGIRL07 started with the Jack's Show video poker game and then moved on to Heavenly Reels, a four payline slot machine with a special accumulating bonus fund. Her lucky streak started when she switched to Wheeler Dealer, a deluxe 9-wheel, 8-payline slot machine.

"My first spin on Wheeler Dealer gave me three gold bars so I knew that this was the game to play tonight," she recalls. "I stayed with Wheeler Dealer for an hour, slowly seeing a rise in my cash. After fifteen more minutes though, I wasn't getting many hits and had almost given up. Boy was I surprised when I got three cash symbols! I couldn't believe it -- I had won $100,224!"

WinADay.com players are greeted and assisted by animated casino staff in the unique three-dimensional Games Lobby where they have seven one-of-a-kind, no-download, instant-play Flash games to choose from. All games are original and only available at WinADay.com, and they're all tied to one progressive jackpot pool.

The WinADay.com jackpot has been re-set and is already approaching $40,000. Meanwhile, the jackpot at Slotland.com is begging to be won. Although it's gone as high as $200K it's usually hit not long after it tops $100K. It's been over that for several days now and could be won at any time.