Poker Stars has reopened for most of the world, but not yet in the United States. It is endorsed by professionals like Daniel Negreanu and Chris Moneymaker. The site offers Texas Hold'em, Omaha, Omaha 8/b, 7 Card Stud, 7 Card Stud 8/b, Crazy Pineapple, Crazy Pineapple 8/b, Triple Draw, Royal Hold'em. Table limits range from penny games up to $300-600. The competition leans to the more challenging end of the spectrum.
Play Now at PokerStars!
Club USA Casino

Club USA Casino has burst onto the online casino scene and has won a lot of support from online gamblers.  Accepting players from around the world, including the US market, Club USA Casino has a wide variety of slots and games on offer.  The casino also has a good sign-up bonus and great customer support.  For fun casino action, check out Golden Casino.  Club USA Casino accepts US players.
Play Now at Club USA Casino! 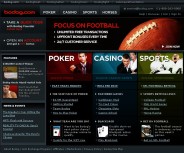 Bodog Home Page  event drew 279 online poker players and featured a prize pool of $161,130, which included $30,000 in added prize money courtesy of Bodog.com. In the end it was "Biffsworld" who bested the tough field to become Bodog.com's next poker champion, winning the $40,282.50 first-place prize.

The 23-year-old Pennsylvania resident has been playing on the virtual felt of the Bodog.com Online Poker room since Oct. 2007 and has taken down several smaller tournaments over the past two years, but this is by far his biggest cash. Much like the last two Bodog Poker Open Main Events, Biffsworld did not have an easy road to victory. The field featured many well-known online poker aces, including Bodog.com Poker Pros Jean-Robert Bellande and Justin Bonomo, who played alongside regular Bodog.com leaderboard fixtures "ImTheJackal," "IGotAPair," "Bevos_Nuts," "daisyxoxo," "vinnyb9," "3pounder," and the inaugural BPO Main Event winner "phatcat."

"With around 25 people left I realized I had a shot at winning the event," says Biffsworld. "I started really building up a good size stack and was able to pad my lead by putting a lot of pressure on my opponents. I was also fortunate to win a lot of coin flips."

The $15,000 Guaranteed Bodog Poker Open III Mini-Main Event gave the 321 entrants incredible value for their $50 buy-in. When all was said and done, Bodog regular "winjack" walked away with the top prize of $3,750.

"The Bodog Poker Open III was the most diverse and accessible tournament series Bodog.com has ever hosted, giving online poker players of every experience and bankroll level the chance to get in on the action," said Bodog.com Poker Pro Justin Bonomo. "Now that the Bodog Poker Open III is behind us, players can look ahead to the 2009 World Series of Poker* and joining me and the rest of Team Bodog in Las Vegas by qualifying through one Bodog's cheap and easy qualifying tournaments."

Over the past eight days, the Bodog Poker Open III paid out an incredible $606,741 in prize money and drew 4,861 online poker players who participated in the unique combination of high-stake, mid-stake and low-stake events. In the Mini-Bounty Tournament Series an incredible T$12,150 in bounties was paid to 243 players.

With another successful Bodog Poker Open in the books and the summer quickly approaching, attention in the Bodog Poker room turns to qualifying online poker players for the 2009 World Series of Poker*. Bodog's simple and easy online qualifiers for $12,000 Main Event VIP packages start for as little as $1+$0 and offer online poker players a surefire shot at poker immortality.