Online casino slots are loose. Why? Because with the lower overhead, no slot employees to pay, and lower taxes, they can afford to pay more back to their customers. Roxy Palace offers a huge range of casino slots for you to play for fun or for real money prizes. From easy to play 3-reel games and fruit slot machines, all the way through to popular video slots, progressives slots and brand new releases from Microgaming, every game provides a high level of quality.
Play Now at Roxy Palace!
Sportsbook.com 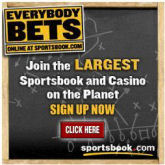 Owned by publicly-traded Sportingbet PLC, Sportsbook.com is an online sports betting, online casino gambling and multi-player online poker room provider with live betting lines, 24/7 customer service and fast payouts. In 2005, it was voted the 'Best US Sportsbook' by eGaming. The site is licensed in Alderney.

LAS VEGAS, Nevada –- Elpidio Bustira arrived early at the Bally's sports book Wednesday morning, happy to be back after a forced five-month hiatus.

book's owner, Harrah's Entertainment, closed the book in late March to save money, sending loyal Bally's customers, such as Bustira, next door to Paris Las Vegas.

Although he liked Paris Las Vegas' sports book, Bustira missed the familiar faces and surroundings at Bally's 256-seat book. He's glad the facility is reopening in time for football season.

"It is more alive here during football season than any other sports book," said Bustira, a Bally's customer since 2003 who also bets on horse racing.

Bally's is lining up celebrity appearances by sports figures and promotions with local vendors to bring attention to the book's return.

Bally's hired back five of the nine workers laid off in March; the other four found work elsewhere or moved. Four new workers were hired.

Bally's also took the time during the closing to do some minor remodeling at the bar and a total remodeling of the VIP room overlooking the sports book.

New televisions were added in some areas, updated in others.

Although the company saved money on operations, how much was lost in revenues is hard to gauge. Harrah's Entertainment doesn't report its sports book winnings separately from casino revenues.

The sports book was closed for the majority of the baseball season, which accounted for 17.9 percent of 2008 sports books' winnings in Clark County.

The counters were also closed during the bulk of the horse-racing season, which generated $70.9 million in winnings last year.

Bill Zimmer, vice president and casino manager of Bally's and Paris Las Vegas, said the closing was a business decision that was right for the time.

"Keep in mind, it is an extremely slow period (for sports betting) coupled with a real tough economy," Zimmer said. "The fact that we had Paris, we were able to continue to service our guests. So from their standpoint it was not a problem."

An annual closing of the Bally's sports book during the summer will not happen, he added.