New Sahara Owner Has Eyes on the Past, Hand in the Future

As one of the Strip's last remaining icons, the Sahara savors its 55 years in operation.

The wall behind the hotel's front desk 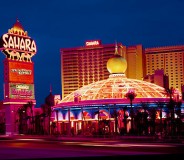 The Sahara, Las Vegas  is adorned with old photos from the casino's heyday, when its star-studded showroom lineup included Johnny Carson, Tina Turner, George Burns, Jack Benny, Dean Martin and Jerry Lewis. The House of Lords steakhouse remains one of the Strip's last gourmet rooms that can trace its roots back to the 1960s.

Over the past four years, the Sahara's chief executive officer, Al Hummel, wanted to find a buyer for the property who would not only share in the history of the casino, but could also bring a new vision.

Hummel said Monday he believes the Sahara has found the right buyer in Los Angeles-based SBE Entertainment Group, which is acquiring the property in partnership with San Francisco-based Stockbridge Real Estate Funds. No purchase price was disclosed but sources said the deal was between $300 million and $400 million for the 1,720-room hotel-casino that sits on almost 18 Strip acres.

"They have some wonderful plans for the Sahara, although they are not completely finalized," Hummel said. "They are going to spend a ton of money on this place and I believe they have the plans and the vision to rocket the Sahara to the next level."

Hummel has run the Moroccan-themed casino since 2003 upon the death of his brother-in-law, Sahara owner and casino pioneer William Bennett, who bought the resort in 1995 for $193 million.

Over the past four years, Gordon Gaming Corp., the casino's Bennett family-controlled ownership, upgraded the Sahara to ready it for sale. Hummel, who likes to keep a low profile, said he probably met with close to everyone who had expressed an interest in acquiring the Sahara.

His main interests, he said, were to find a buyer who had fresh ideas and who would take care of the casino's 1,400 employees. The workers learned of the sale in a letter distributed over the weekend.

"There were a lot of people who called us who just didn't fit those qualifications," Hummel said. "We talked with people who had money, but not the vision. (SBE Entertainment) is a group that is really dialed in with their nightclubs and restaurants and hotels. I wish I were 20 years younger."

Hummel said SBE has a history of coming into a hotel and renovating it to make a more modern and exciting place.

"They've been very successful with what they have accomplished," Hummel said.

In an interview Saturday, Nazarian said plans for the Sahara are still being formulated, although he understood the casino's history.

Nazarian said the immediate goal is to upgrade the resort's food and beverage offerings to help bring in more customers.

"We've spent a lot of time looking at the Sahara and we plan to spend more time getting to know the employees and understanding every aspect of the resort," said Nazarian, who spent three years looking at potential Las Vegas casino acquisitions.

Nazarian said the negotiations to acquire the Sahara took more than a year to complete.

"The Sahara has a lot of history and that's something that excites us," Nazarian said. "Our company has the background in taking something that's older and giving it a new and exciting design on all levels. We've done this with a lot of our hotel properties, and this is what we plan to do with the Sahara."

The Navegante Group, a casino operation company that manages four downtown casinos, four casinos in Elko and a casino in Carson City, will run the Sahara's 85,000-square-foot casino once the sale closes.

It's unclear what will happen with the Sahara's NASCAR-themed entertainment areas, which include the NASCAR CafÃ© and a race car-themed roller coaster ride. The Sahara owns those locations and pays a small fee to the National Association of Stock Car Auto Racing for the licensing rights.

Hummel said the Sahara will continue on course until the ownership change. No date for the deal's closure has been set.