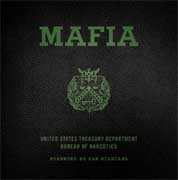 The period from the late 1950s (the time of the Mafia's famous Apalachin summit in upstate New York) through the late 1960s (when The Godfather was published) were a golden age for organized crime in America – the era that saw the Meyer Lansky generation give way to the Gambinos and Bonannos, that saw an explosion in narcotics trafficking, and that inspired storytellers like Mario Puzo, Nicholas Pileggi, and Martin Scorsese. Now, in an unbelievable find, comes the long–buried Bible of the Mafia and all its most storied players, at the height of that watershed era.
Get it at Amazon!
Read a review of Mafia: The Governments Secret File on Organized Crime

The World Series of Poker Europe will be the first WSOP event to be held outside Las Vegas. The tournament will set in London September 6-16, 2007 and will be hosted at three casinos operated by London

The World Series of Poker is the biggest poker event of the year.  Clubs International - Fifty, in St James; The Casino at the Empire, in Leicester Square, and The Sportsman, at Marble Arch.

The World Series of Poker Europe presented by Betfair.com will consist of three events. The largest of these is the Main Event, a GBP 10,000 buy-in, 750-player, six-day tournament spread over three casinos with a prize pool of roughly GBP 7.5 million. The winner will take home cash and a WSOP gold bracelet, the most coveted prize in poker. It will be the first time a WSOP bracelet can be won outside the US.

A 29-year-old professional poker player, Bord was cheered to victory by a boisterous crowd. Prior to playing for a living, Bord worked for international banking giant Citigroup. He decided to leave his conventional job to focus instead on playing poker for a living.
Erik Cajelais wins the World Series of Poker Europe Event 2

This is a breakthrough victory for Cajelais, a 27-year-old professional poker player from Montreal who has come close to a major tournament win on several occasions. His best previous finish was second place in the US$5K Pot-Limit Omaha event at the 2007 WSOP.
18-Year-Old Girl Wins First World Series of Poker Europe

Pre-registrations has officially opened for the World Series of Poker Europe. According to reports, all-time WSOP bracelet leader Phil Hellmuth Jr. has made an official commitment to play.
Harrah's and Betfair Partnership Breaks New Ground

Harrah's has executed a non-binding letter of intent to form an alliance with Betfair.com that will designate Betfair.com as the Presenting Sponsor of the World Series of Poker Europe through 2011.
© 2006-2012 ReadyBetGo!