The sound of hooves thundering around a racetrack, the urging roar of the crowd as thoroughbreds head towards the final straight, followed by cheers of delight when the winner speeds past the finishing

Photo by James Anthony from Pexels  post. Horse racing remains one of the oldest and still most widely admired sports in the world.

Also known as the ‘Sport of Kings’ in popular culture, horse racing is enjoyed by everyone from wealthy aristocrats to your average person in the street, all hoping to strike it lucky by backing the winners. But before you go waving your money at the bookies, it’s always handy to know a little more about the sport itself.

Getting to know your distances

Back in the olden days pretty much everyone used imperial measurements, then most countries around the world began adopting the metric system. Now this can sometimes cause a little confusion when it comes to horse racing, especially regarding the distances involved, while the sport itself can sometimes use terms that hark back to a bygone age.

One of the most common words you might hear mentioned is furlong, although if your brain is wired to metric measurements, you may have no idea what this word even means. The word furlong actually dates back to Anglo-Saxon times, combining the Old English words furh (furrow) and lang (long), originally referring to the length of a furrow in a ploughed field.

Using the archaic original measurement, one furlong is equal to one eighth of a mile. One furlong is also equivalent to 660 feet or 220 yards in imperial measurements, and 40 rods or 10 chains if you want to go all the way back to Anglo-Saxon lengths. One furlong converted to metric is precisely 201.168 metres, while five furlongs is just fractionally over 1 kilometre.

Where the richest races are located

For more than a century, Britain, Australia and the United States have been home to the most prestigious horse races, usually accompanied by the biggest purses to attract participating owners and trainers. However, in recent decades massive sporting investments in the Middle East have also touched horse racing, which led to the construction of world class facilities.

Backed by such wealth, two countries are now vying to boast the richest horse race in the world. First held in 1996, the Dubai World Cup gradually established itself as one of the richest races in the world, offering a prize purse of $12 million in 2022, almost matching the $15 million purse of The Everest in Australia, while dwarfing the $6 million Breeder’s Cup Classic in the USA.

Nevertheless, once the Saudi Cup was inaugurated in 2020 and hosted at the King Abdulaziz Racetrack in Riyadh, this would become the richest horse race in the world. Ever since the first running, the headline race has invited some of the most prestigious horses and trainers, tempting them with the chance to share in a whopping $20 million prize fund.

The most famous thoroughbred horses 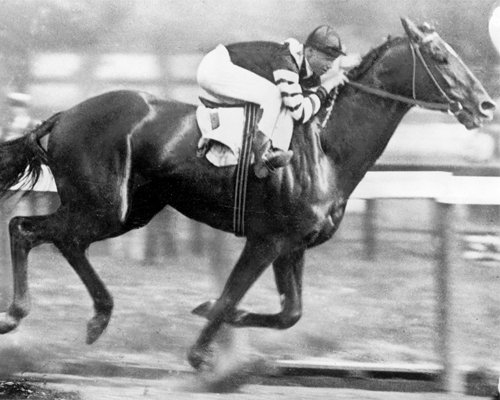 Over the years, the names of some elite horses have become legendary, attaining an almost mythical status in the sport for their exceptional achievements. As the champion horse who was kidnapped and never recovered, an air of mystery still surrounds Shergar to this very day. This magnificent stallion won several major races in 1981 and broke numerous records, which made him the most valuable racehorse in the world, before being stolen in 1983.

Insofar as American racing history is concerned, Man O’War came close to perfection according to ESPN, during their look at the most influential sporting names of the 20th century. This remarkable horse won 20 of 21 races in 1919 and 1920, while many still claim that only defeat was invalidated by a faulty start.

Furthermore, the bloodlines that were sired by Man O’War feature some of the greatest names in thoroughbred racing history. These include Secretariat who achieved phenomenal success during the 1970’s, and even earlier during the 1930’s, Seabiscuit who became the subject of a 2003 Oscar-nominated movie starring Toby Maguire.

How to find the best betting options

Just a few decades ago, most people would visit high street betting shops and some still do, given their entire business was predominantly built around backing the horses. But when the internet ushered in a golden age of communications technology, then prompted the boom for mobile devices, everything changed.

These days there are quite literally thousands of online bookies to choose from, allowing us to wager from the comfort of our own homes or from practically anywhere via mobile phones and tablets. Such a huge choice of options can also be confusing, which is why SBO provides a regularly updated list of the best horse racing betting sites in UK, featuring unbiased reviews covering the best online bookies around.

Given the competitiveness amongst bookies for our business, it makes good sense to compare which provide the broadest range of horse racing betting markets, along with the best value odds and most frequent promotions. This makes the SBO guide a highly useful resource for experienced and novice bettors alike, helping us find our ideal sites, as we enjoy wagering responsibly on the biggest horse racing events in the world.