In a filing last week with the Securities 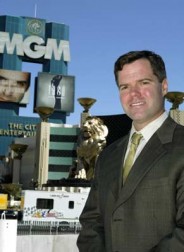 Jim Murren, CEO of MGM  and Exchange Commission, the casino operator said it had executed a new employment agreement with Murren, replacing the contract that was expiring in January. The new agreement expires in April 2013.

Under the terms of the contract, Murren will receive a base salary of $2 million and is eligible for bonuses and cash awards of up to $4.25 million annually.

In November, Murren replaced Terry Lanni as chairman and CEO. Lanni retired after 13 years with the casino operator.

Murren's base salary had been $1.5 million according to company filings. In 2007, he received total compensation of $8.5 million after incentives and perks.

Murren joined the then-MGM Grand Corp. in 1998 as chief financial officer after spending 14 years on Wall Street as an equity analyst and managing director of Deutsche Bank. Murren was named company president in 1999, prior to the buyout of Mirage Resorts.

In 2007, Murren gave up the CFO duties and took on the role of chief operating officer, overseeing the day-to-day operations of the company's hotel and casino properties and becoming the No. 2 person in the MGM Mirage hierarchy.

Lanni had earned a base salary of $2 million with MGM Mirage. In 2007, he received total compensation of $12.7 million, which included incentives and perks.