"Andreas Oscarsson was shot to death 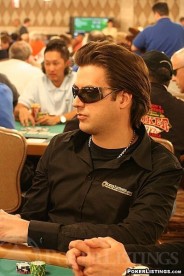 Poker mogul Andreas Oscarsson was assassinated in Sweden  last Monday while sleeping in his father's house, and there was no evidence that there had been any kind of dispute or that the home had been robbed, officials said.

"...Probers are looking into whether the murder may have been the result of a business dispute.

"Oscarsson, 36, was the founder of the Web site PokerListings.com, a highly regarded resource.